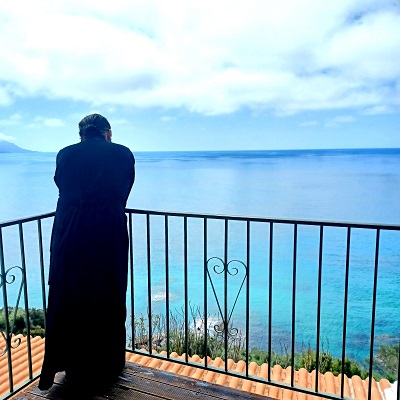 In my opinion, Mirtiotissa Beach is top 5 most beautiful beaches in Corfu.  First of all, Mirtiotissa beach is located between Ermones beach and Glyfada beach.  It is in between the villages Pelekas and Vato.  The road to get down is very bad.  It is very steep and becomes dirt at some points and they’re a lot of curvy roads.  There is small parking at the top that most people decide is the best place to leave their car and go on foot. I agree this is best.  It is possible to get down with a regular car, but the only parking is on the road which is on a huge hill so it isn’t the best idea.

FACT: The famous writer Lawrence Durrell proclaimed Mirtiotissa Beach as “perhaps the most beautiful in the world.” 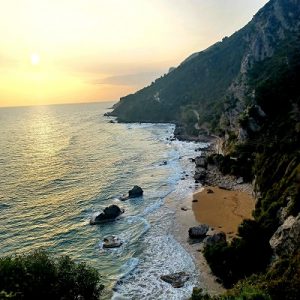 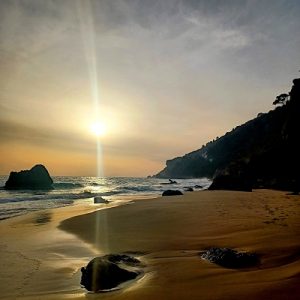 Mirtiotissa Beach is one of few nude beaches in Corfu and people like it that way.  Mostly every that shows up follows the unwritten rules and bathes nude.  Mirtiotissa beach is a sandy beach with some big rocks around.  The placement of the rocks is perfect making the beach look even more beautiful.

The water is not as cold as the sea near Paleokastritsa but it is still on the west coast of the island meaning it is colder beaches on the east.  You can walk a good amount in the sea and the water will still be below your head.

There is a natural stream of water coming from the rocks that people use as a shower! 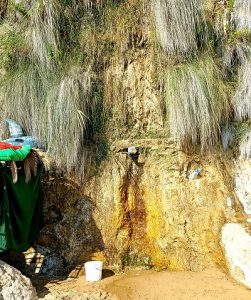 Sometimes during the year, there is someone selling some fresh drinks if you are thirsty! 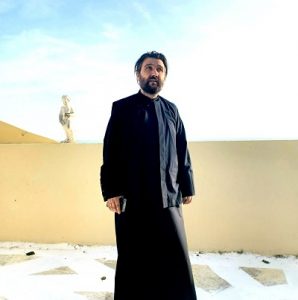 Mirtiotissa Monastery is definitely worth a visit.  The beach is beautiful, but the Monastery with the history is something else.

Father Daniel, the current Monk that lives here arrived in 2006 when he found an old, partially destroyed monastery from all the years of pirate raids, robberies, and time.  He sought to restore this beautiful place seeing all the potential it had.

Father Daniel, himself was born and raised in Germany to Greek emigrants.  He was interested in tourism from a long age and learned 4 languages along the way.  He showed tourists around the famous Agios Oros.  The highest mountain in Greece, an independent state and a place where many monks live still to this day.  After Father Daniel spent many years in Jerusalem, studying prayers and rituals, he eventually found Mirtiotissa in Corfu which he came to love.  He started to restore the monastery and did a fantastic job.  He also brought life to the wilderness.  You can find hare, rabits, goat, peacocks, racoons, cats, birds, and more in the mountain.

The monastery of Mirtiotissa was built around 15th century.  The exact date is not known, but the first Father was also named Daniel.  He was from Persia and converted to Christianity.  They say he had a vision one night telling him to go to this mountain of the Myrtles where he will find the icon of the virgin Mary in a cave.  He didn’t pay any attention but then something came to him while he was awake also. So now he set out to find these places asking the locals.  Eventually, he found and built the monastery there! 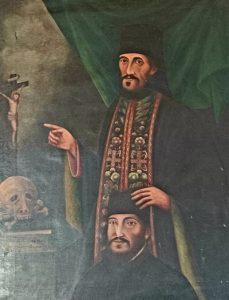 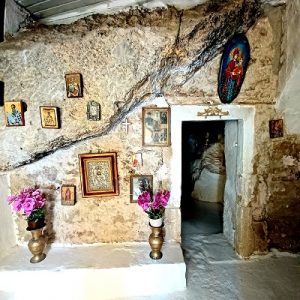 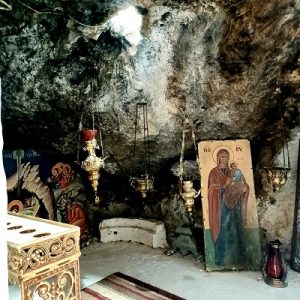 As you walk into the monstery (still outside, just inside the walls), you will be greeted by many following cats and a beautiful view of the sea.  Continuing down the hall will lead you to the famous cave where you can witness yourself the beauty. 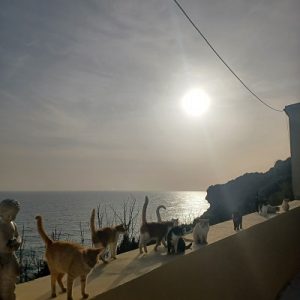 By now, you have probably heard a strange animal call that only if you have heard before you will know what it is.  They are the peacocks.  There are many on this mountain.  Peacocks, as you may know, are a symbol of heaven or of a higher spirit. 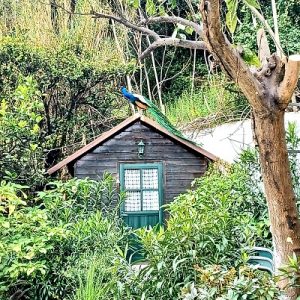 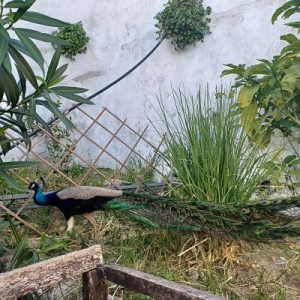 There is a nice veranda with a big table where it is possible to sit for a break.  You will also have the church on your site.  Inside the church, you will find the astonishing icon that was found in the cave of the Virgin Mary.

If you are lucky enough you may have Father Daniel show you around.  In the areas that are typically allowed you can find more interesting things such as a very old olive oil press which was used by the Monks many years ago.  Above the olive oil press, there is a place to stay for guests.  Here many Russians come every year to help with the monastery. 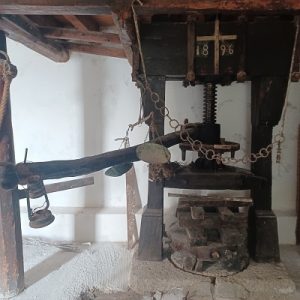 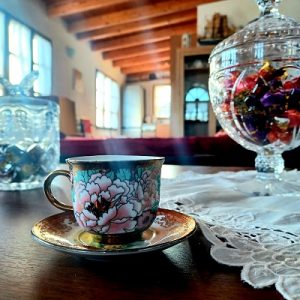 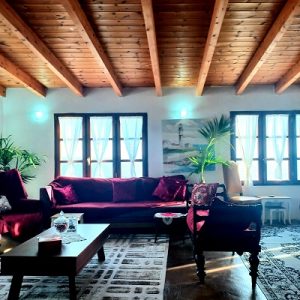 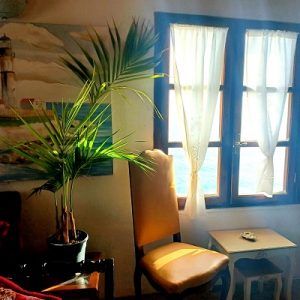 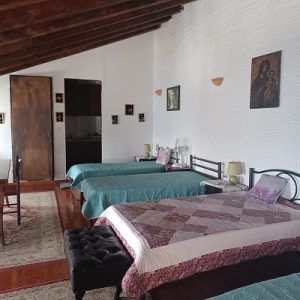 A room is full of all the Monks that have served at this beautiful place with a balcony view that will send you into daydreaming land.

Here in the mountains of Mirtiotissa, you will find many paths which are perfect for hiking.  There is one that goes all the way to Vato, which is a part of the Corfu trail.   All over the mountain, you will find olive trees like anywhere else in Corfu and you can also find multiple caves. 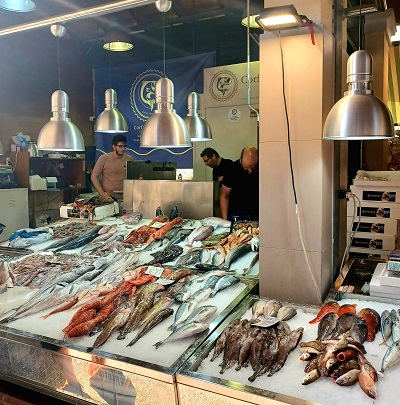 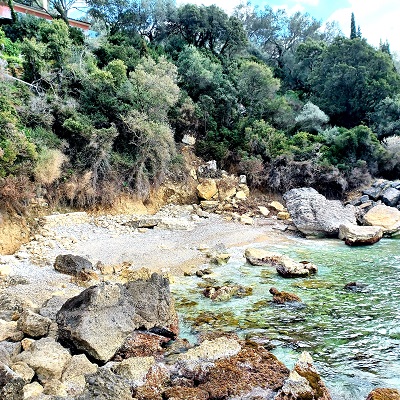 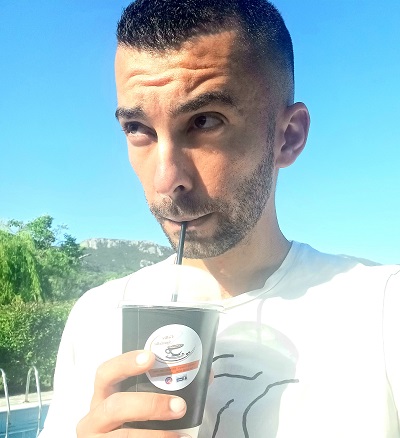 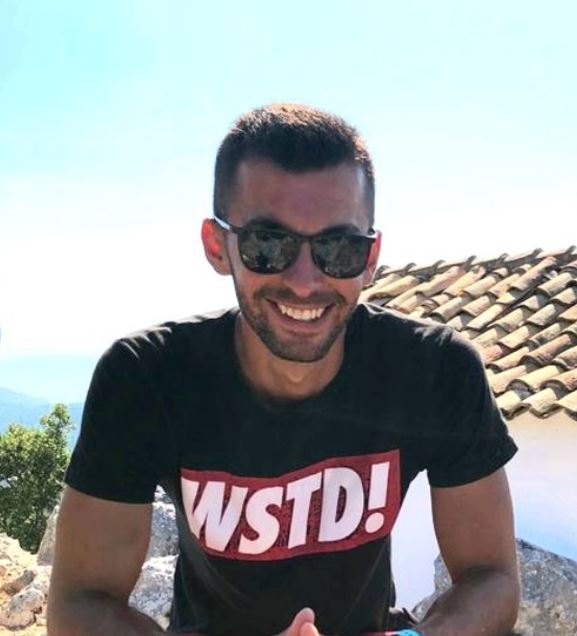 My goal is for you to have a great holiday here on Corfu. To be able to do what you and the people you are traveling with are passionate about. I am trying to reach all different kinds of people so if you have any ideas that I have not mentioned please feel free to contact me so I can add your ideas to the list. Since, if you are interested in it, others will be too! 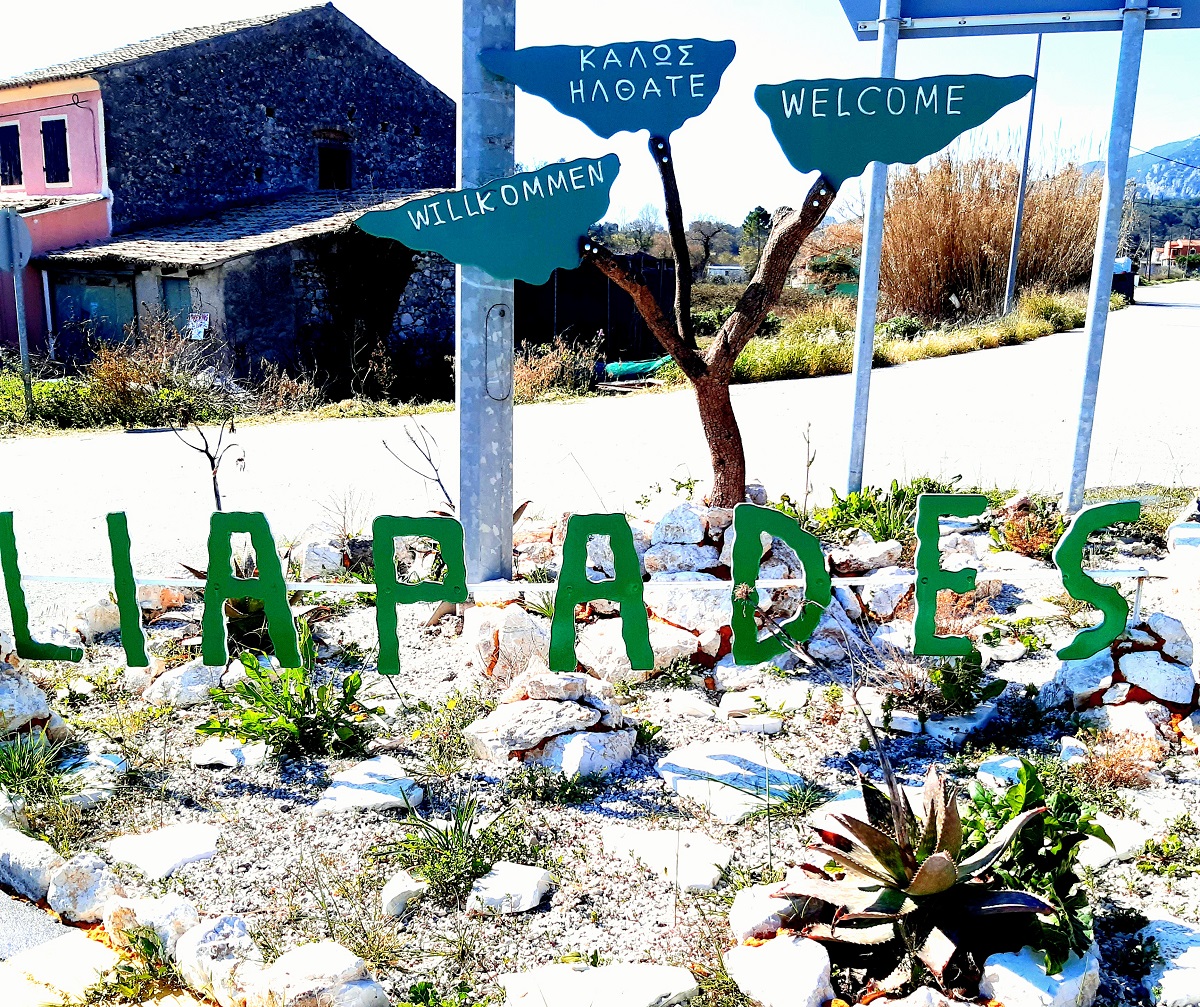 Liapades – All you need to know

This is in the top 5 best views in Corfu. Watch

The Valley The valley used to be all worked on fu

Vatos, Corfu The village in Corfu, Vatos, is not

Corfu Town on a cloudy day Which way is the bette

I still can't believe I didn't know about this pla

Did you notice? The beach is empty... Paleokastr

7th Heaven Cafe/Bar It's the perfect place to wat

Why do we love going to the beach? Is it the hot

The old village of Paleokastritsa Just above the

Corfu's 2 favorite colors? Hiking down to Giali B

Άγιος Σπυρίδων People wonder why so

Corfu - Igoumenistsa There are ferries every cou

Olives of Corfu! Corfu is full of olive trees. Ev

Garden of the people This garden is located right

A Corfiot Village Here are some more photos of th